Travelling during the monsoon season, I was first caught in a dilemma whether or not to make the trip to Adam’s Peak. When I shared with other travellers or locals whom I met along the way, that I am intending to climb the Adam’s Peak, I was told that the chances of sunrise obscured by clouds or mist are pretty high and potential rain will make it difficult or impossible to peak the mountain during this period. Some even told me that the trails are closed during this season. So while I was still contemplating, some travellers who just came from Adam’s Peak told me that the trails are still opened and the lights that guide your way to the top are still on. Since I had been in the country for about 2 weeks then and was blessed with fine weather so far, I took the chance and decided to go anyway.

But the Prime Minister of India was visiting, elephants were being transported to Kandy city for some festival/event too, and so the traffic on the road would be heavy on the day I was set to leave Kandy for Adam’s Peak. Having no choice, I could only travel the day after, visiting Nuwara Eliya in the day before heading to Dalhousie/ Nallathanniya where most hikers rest overnight before the climb.

Adam’s Peak can be climb at anytime of the day. However, the goal is usually to reach the peak at sunrise, typically starting the hike at about 2 in the morning.

Train rides through Sri Lanka’s mountainous areas is said to be one of the best in the world, providing amazing view of its tea plantations along the way, which got me all looking forward to the ride from Kandy to Nuwara Eliya (Nanu Oya). And though it was beautiful with the lush green scene and breeze, until the clock struck 12 and the sun was shining mercilessly on my leg as I sat by the door, the real surprise was during the bus ride from Hatton to Dalhousie/ Nallathanniya.

Sitting on a bumpy bus, winding through hilly roads, I looked up and found myself riding into a glorious sunset glow beaming from behind the mountains, shading the sky bright orange. I whipped out my camera and tried to capture a few shots, but all failed, so I put it away and enjoyed the view as the sky turned pitch-black. Soon after, a trail of seemingly fairy lights appeared from afar. “That must be the Adam’s Peak!” I told another traveller sitting behind, and we are both glad that the lights are still on. The lights snaking its way to the top gave another touch to this town which I thought was just a place to crash for, creating a sense of excitement looking at it and knowing that I will be making my way there in a few hours. As the night turned chilly, I pulled out my jacket which was entirely soaked because my bottle just had to spill on the day I needed it. I should have guessed that the hike was not going to easy by then.

Take the evening buses (around 6pm) from Hatton to Dalhousie if you can. If the weather is good, you might just be awarded with an amazing sunset view!

Woke up at 2 in the morning to a still wet jacket and I thought I was going to freeze to death up in the mountain. But I have came all the way here, it would be such a pity to ditch the plan. I just had to go! Almost every hiker from the guesthouse I stayed at have left for Adam’s Peak by 2:10am. So I waited a bit and was joined by a gay couple in the end. After some time, we arrived at a crossroad which has no sign and so we took the right. It took us to a lit area where there are a few Buddhist sculpture and a man approached saying he wished to blessed us for the trip up Adam’s Peak, then tied a white string on our wrist before asking for donations. On the book recording donations, it states that every tripper that day donated at least 1,000rupee, so I felt kind of obligated to do the same. When we exited the area, the left of the crossroad joined in.

It got warmer as we climbed and not long after, we were stripped down to just a t-shirt and shorts as we usually do. I was going to stopped for a rest, but the guys kept on going that I just had to persevere and keep up with them cause I might take ages to reach the top if I’m alone (or so I thought). However, just a few steps after buying water midway, I decided to take a break sitting by the stairs, hence splitting up with the rest. When I got up on my feet 10mins or so later, I was thinking will my next break come soon.

“Keep going. Keep going” I pushed myself, walking past a group of 4 guys whom I saw at the beginning when I heard one asking if I had food. Pulling out a pack of biscuits and passing it to him, he quickly explained that he was asking if I need food as my face looked pale. LOL. I must have been. He didn’t look too well either so I asked if this is his first time at Adam’s Peak, but that was actually his 8th. Since he has been there a few times, I asked if he knows how many steps are there left to the peak which he replied “about 5000”. Hell. I have walked for more than an hour and the total number of steps for this trail is around 5500, I could have fainted if that’s true. Though I told him I was okay, the fact is, I might puke at the bite of food.

There were quite a number of locals that day and many were there for more than once. I even met a local who was doing this for the 11th time! Trying not to talk at all and focused on catching my breath instead, keeping a steady speed to reach the peak in time for sunrise, a few groups of locals asked where am I from and started chatting when I walked past till I had to say “Sorry. I am not able to speak right not. Please go ahead.”. They would say okay and asked me to take my time, but continued to asked me questions anyway. When they stopped to take a break, I continued with heavy footsteps until I arrived at the last stretch a.k.a. the steepest part, where it got even heavier. From here, it is said that it will take another 30 minutes. Clenched my teeth and continued with my head down, lifting my heavy legs through each step, and I finally reached the peak at around 5am, right before sunrise. I DID IT!

How gorgeous was the view from above. The sky was in a shade of midnight blue when I arrived, as most hikers do, and we were just enjoying the cool air, feeling the great sense of achievement as we pant how difficult the climb was under our breath. As the sky gets brighter, it revealed a mysterious silvery lake below. Clouds rolled in as the sun was about the rise and it felt like everyone was holding their breath then, hoping that it will not obscured the view, but luckily it came and left quickly. And there, the sun rose majestically above the mountains, lake shimmering bright thanks to the sunlight. It took my breath away again & again with its ever-changing scenery within this short one hour.

After all these beauty, enjoyment and celebration for reaching the peak, it comes the one which people dread most – the way down. It is said that going down is worst than up as most of our legs would be wobbly like jelly then. It really depends on individual though. Going down was a breeze for me and along the way, I bumped into the couple and some other travellers from the same guesthouse, and we stopped by a teahouse which was luckily still opened during this season, enjoying a cup of hot tea before heading back. Everything was fine until I woke up the next day, bend to get my phone which was on the floor, that I know “this is it” – the aftermath. 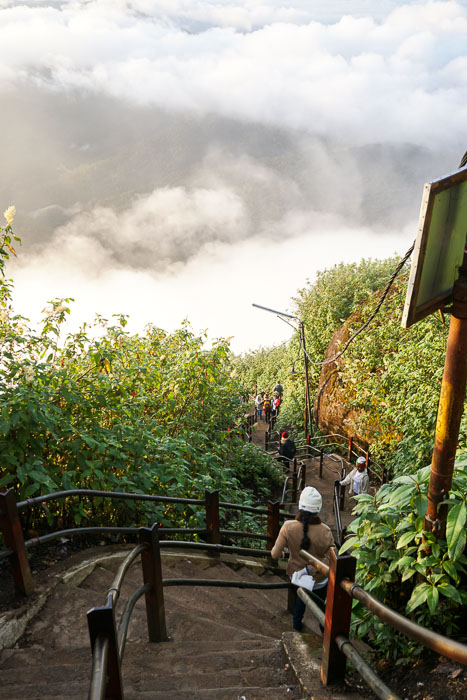 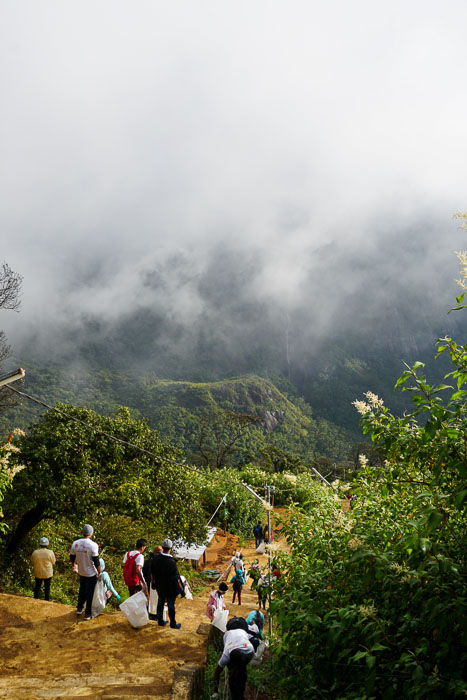 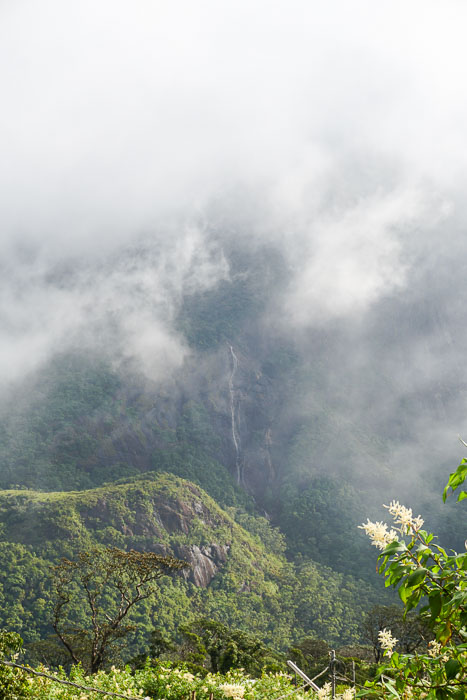 Before Adam’s Peak, my favourite was a difficult 8hrs hike in Arenal Volcano National Park, Costa Rica. Now, I found another favourite of mine and it is not an easy one as well. So I guessed the saying “all good things come with a price” is true. If you want an amazing sunrise view of Sri Lanka, you are going to have to conquer that 5500 steps.

A 2,243 m tall mountain well known for the Sri Pada (sacred footprint), a 1.8 m rock formation near the summit, which in Buddhist tradition is held to be the footprint of Buddha, that of Shiva’s for Hindu, and that of Adam’s in Christianity.

When to go: Dec – Vesak Day in May. During other months it is hard to climb the mountain due to heavy rain, extreme wind, and thick mist. Lights are turned off and teashops closed during off season as well. (I went in mid-may, a few days after Vesak, and lights and 2 shops were still opened.)
Avoid: Poya days (full moon), Sri Lanka New Year and weekends. When it is packed, the walk to the peak might be longer as you wait for those in front of you. It might also be impossible to reach the peak as the area at the top is not huge to accommodate all.
Trails: There are 6 trails in total and the most popular route is from Dalhousie/Nallathanni, which is also the shortest but steepest.
Dalhousie/Nallathanni Trail: approx. 7km, 5500 steps, 2.5 ~ 4hrs on average. Way down is less than 2hrs.
How to get there: From Hatton, take a bus that goes directly to Dalhousie/ Nallathanni. The bus ride takes around 2hrs and cost 75rupee. A tuk-tuk takes around 1hr and cost 1,500rupee.
What to take along: water, snacks, torch (There are sufficient lights along the way during the season, but there’s a small area which was a bit dark. Better to take anyway), jacket, small towel. When the shops are open during the season, the cost of items might be more expensive closer to the peak.
Getting cash: Hatton. No ATMs in Dalhousie.
Advice for solo travellers (especially when it’s not in the season where there’s no lights and less people along the way): tag along with other groups or hire a local guide.